We’ve arrived and We’re just now leaving the market and we are about to go to the Salt Flats for the first time. We’re going to buy big rubber boots because apparently it’s really wet, not even lunchtime yet and we’ve already had a huge day.This place is unreal. I can’t believe we are here. hot springs. this is what we call ojos de agua usually in Spanish every place where there are springs we call it ojos but this place is not actually Springs. Anytime I see something bubbling out of the earth I just assume is hot but this is actually cold. It’s very confusing. So these holes go all the way down to the underground rivers and it’s just the oxygen coming up from the river flowing beneath the surface. And I offer you some chocolates. Of course.

Yes. My city Sucre is known as the chocolate capital of Bolivia. The Bolivian Salt glass. This is incredible.  I can’t believe it. It just keeps getting prettier. This is so crazy. I just want to go walk on it forever and ever. We just drove 70 miles into the middle of the salt flats to this island. Once we got like 50 kilometres out you could start to see it and it felt like we’re gonna be there any minute the entire time. The depth perception here because it’s so flat is so messed up. Also we learned that we’re super lucky with the rain situation going on because if it rains too much it’s flooded and you can’t make it to the island but if it doesn’t rain then you don’t get this beautiful mirror effect. All in all we’re crazy lucky and feel super grateful to be in such an amazingly beautiful place and now we’re setting up for lunch. Time for a picnic. I don’t think this picnic spot could be beat anywhere else in the entire world. They fed us a delicious three-course lunch in the middle of the salt flats I felt like we’re the only ones here but we learned that 200 cars a day come into the salt flats but you hardly see anyone but I really like it when we do see a car drive by because it just shows how huge this is. 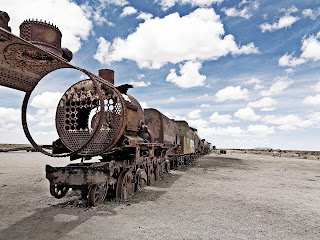 Just got to this island we’re gonna hike to the top. So the name of this island is the Fisher Island officially but we call it  Incahuasi Incahuasi means the house of the Inca but it’s not related to the inka inka itself is related to one of the first people coming from the community in the volcano to live here in the island and his nickname was the Inca so after him they named this island the Incahuasi the house of the inca. This one is one of the highest and it’s approximately 900 years old. In the back of the island we will see millennial ones. In the circle of life All of what you see is this beautiful. Simba. All of that is Bolivia and behind the mountains the dark spot that’s Chile. Without thinking too much How long do you think it would take you to walk to the other Island? Six hours. Well that island is 55 kilometres away. What? So it’d take you eleven hours on an average speed that’s why being so flat it’s also a little dangerous.

This is the best 360 view ever Salt Flats as far as you can see. We’re literally at the very top of an island in the very middle of the world. When all of these was under the ocean these were coral reefs and these are natural coral formations All of them were preserved by the volcano activity that threw the ashes and with the effect of the water petrified the coral. They covered the coral and took the same shape as it and they preserved all of this including the whole island Oh my gosh look at the cactus and the mountain. And the salt flats and the cave. For me this is the perfect natural frame. Now we have two hours drive to where we’re gonna watch the sunset. We’re making a quick pit stop for the obligatory optical illusion pictures. Little behind the scenes Okay now open wider.

We found the perfect spot to set up to watch probably the most beautiful sunset I’ve ever seen. They just set up this table for us and now we’re having cocktails and watching the sunset. We just got to our Salt Hotel. It’s just outside of the Salt flats and the whole thing is made out of salt. [music] Wow Alright, is so cool. The walls are made of salt, the bed frame is made of salt, the nightstand is made of salt, the desk is made of salt there is salt all around the outside of the room just like loose like I can pick it up. I need you to go farther away. Okay. Ready? One. No, no, no, okay now. Did it look cool? Yeah but you need this long hand. On your hand it’s like three steps Alright Kate let’s make this quick. Okay. No, no, no, no, wait, wait. I need you to go closer to your hand with your face. when you kiss him. Like this? Yeah. Okay. More, more, okay, perfect. One, two, three. No, it failed. My socks are really sweaty inside my foot so I dried it out. Here’s the scary dinosaurs we’re fighting. 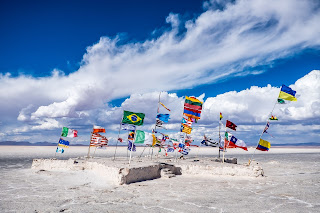